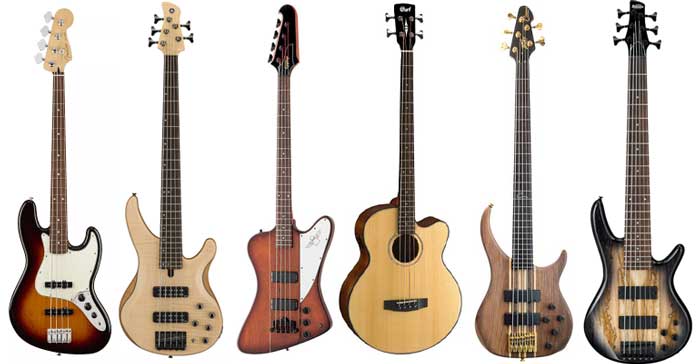 The bass guitar player is a necessary part of any rock band worth its salt, and yet, they are the member of the band with the least amount of credit or recognition. This is a shame, since bassists are equally as often the members of the band that make a bold statement – not only with their sound, but with their style.

We’ve compiled a short list of some of rock’s most unique bass guitars and their players, as well as some useful information you’ll want to keep in mind so that you, too, can be like rock and roll’s great unsung heroes.

But first things first – what makes a guitar a bass guitar? Bass guitars are built like regular electric guitars, but have thicker metal strings that produce lower frequencies. Basses can be either acoustic or electric, and come in a variety of setups:

The following pieces of equipment helped to lay the foundation for rock music as we know it.

Perhaps the most recognizable bass in rock and roll, the Beatles bassist’s signature instrument was first purchased in 1961, and a second, replacement model would follow in 1963. Apart from the smaller, violin-shaped body, what made the OG ’61 Höfner unique was that it was a right-handed guitar that its owner played upside down. That’s right, Sir Paul is a lefty, and has been doing all of us left handed wannabe bassists that you can get the job done even if it’s done backwards. Incidentally, the ’63 Höfner is still in use today in McCartney’s concerts.

It’s no exaggeration to say that the Who’s John Entwistle revolutionized the instrument, both in terms of power, volume, and virtuosity, and customization. Known for wanting to change up the look and feel of his basses, from 1968-1971 – at the zenith of the Who’s run – Entwistle played a Precision model bass. The special thing about this P-bass, though, was that it was – so the legend goes – cobbled together by the Ox himself out of no less than five different instruments. If you listen to such Who masterpieces as Tommy, Live at Leeds, or Who’s Next, you’re hearing the creation lovingly called “Frankenstein.” After the bassist’s untimely death in 2002, Frankenstein went for about $100,000 at auction.

Jack Casady and the Guild V

John Entwistle wasn’t the only player to customize a bass to make something new. Jack Casady, bassist for Jefferson Airplane, wielded a bass that was tweaked to look like a Guild “flying v” style electric guitar, a look largely uncommon for basses at the time. More than just an uncommon body, Casady’s Guild had a short scale neck, meaning it wasn’t as long or as wide as a standard bass guitar neck.

So now that you’ve decided you want to be a bass player, there are a few considerations you’ll want to make before you start jamming.

Who are your influences?

Once you determine who inspires you most to play, you can begin to look into the sort of equipment your idols use.

What are your differences?

Not every bass guitar is compatible with every bassist. If your arms are smaller, reach for a short scale bass. Lefty? Set yourself up for success by investing in a prebuilt left-handed bass. Do some research to find out about the best hand-made guitars to suit your needs.

What brings uniqueness to the bass guitar is as much the player as the instrument being played. And it is the bassist that brings a uniqueness to their band, but that uniqueness so often goes untapped. May the day quickly come in which the bass player gets their own encore performance.